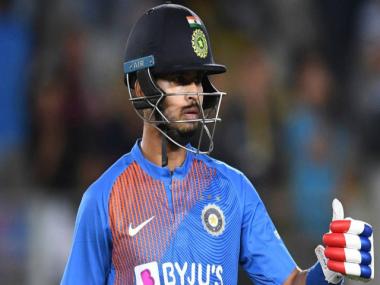 This was Mumbai’s second successive win after they had beaten Delhi in the lung-opener.

But it was Iyer, who anchored the Mumbai chase and saw them home in 47.2 overs.

Maharashtra skipper Ruturaj Gaikwad (19) could not convert his start and was trapped in front of the wicket by Kulkarni.

Kulkarni then wreaked havoc as he dismissed Naushad Shaikh (0), experienced Kedar Jadhav (5) and Ankit Bawane (0) in quick succession as Maharashtra was reeling at 38/4 in 8.5 overs.

However, Nahar and number six batsman Kazi had other plans and they not only pulled the team out of the trouble but took them to a decent position with their 214 run-stand for the fifth wicket.

Nahar struck seven fours and sixes maximums in his 133-ball knock, while Kazi played the perfect second fiddle, as the duo took on the Mumbai bowlers led by India speedster Shardul Thakur (1/57), who played the game after being released from the Indian squad.

Kazi hammered 12 boundaries and two sixes in his 118-ball innings.

When Nahar was run out by Shams Mulani, Maharashtra were poised at 6/264 and then were able to add only 15 runs.

Iyer, who walked in at three, was in his elements and hammered nine boundaries and one six, in his uneaten knock and after Jaiswal perished, he found able partners in Suryakumar Yadav (29), Shivam Dube (47) as they played their roles to perfection.

Dube took the game away from Maharashtra with his aggressive strokeplay, smashing five fours and a six, and took Mumbai on the cusp of a win. The formalities were completed by Iyer alongside Sarfaraz Khan (15 not out).

Chandigarh continued their giant-killing run in their Elite debut, stunning hosts Bengal by five wickets in a Vijay Hazare Group E clash at the Eden Gardens on Tuesday.

Fresh from their win over neighbours Haryana, Chandigarh who were playing their second domestic season chased down Bengal’s 253/9 with seven balls to spare to climb up to the top of the group table, ahead of Saurashtra on the net-run rate.

Saurashtra secured a thrilling one-wicket win over star-studded Haryana at the 22 Yards Academy in Saltlake.

Hosts Bengal, who made a group stage exit in the Syed Mushtaq Ali T20s, dropped to third spot with one win and a loss.

Sent in, Bengal found themselves caught in a spin web of Chandigarh trio of Gaurav Gambhir (2/45), Bipul Sharma (2/50) and Gurinder Singh (2/47) as the hosts lost wickets at regular intervals to be restricted to 253/9.

The only bright spot in Bengal’s lacklustre batting show was all-rounder Shahbaz Ahmed’s 66-ball 59 that provided some stability in the middle before tailenders Akash Deep (25 not out from 13 balls) and Mukesh Kumar (16 from 15b) took the total past 250.

Chandigarh responded with a commanding opening partnership of 126 runs by the duo of Arslan Khan (88 from 95b; 9×4) and skipper Manan Vohra (45 from 68b; 3×4) before the in-form Shivam Bhambri took charge with a calm and composed 71 not out.

With Chandigarh going strong in their chase, Bengal made some inroads in the death overs by picking up three wickets for one run to see the visitors 230/5, needing 24 runs from 22 balls.

But Bhambri, who was scintillating form in the Syed Mushtaq Ali with three successive half-centuries, held his nerve and sealed the chase with his unbeaten knock from 74 balls that had seven fours and one six.

Opener Jay Bista starred with a 61-ball 71 as Uttarakhand outplayed Manipur by seven wickets for their second consecutive win in the Vijay Hazare Trophy Plate Group on Tuesday.

Sent in to bat, Manipur lost the openers Narisingh Yadav (2) and Al Bashid Muhammed (4) by the sixth over and the rest of the batsmen struggled against a disciplined bowling attack.

Left-arm spinner Mayank Mishra was the best of the Uttarakhand bowlers, returning figures of 2 for 18 from 10 overs while Akash Madhawal (2/27) and experienced left-arm spinner Iqbal Abdullah (2/32) too picked up two wickets each.

In reply, Bista continued his good form with a knock of 71 (8 fours, 2 sixes) to follow up his 141 on Sunday against Meghalaya to set up the win. He added 113 runs for the first wicket with Kamal Singh (41) and set the platform for Uttarakhand’s win.

Assam also notched up their second win, beating Arunachal Pradesh by five wickets to join Uttarakhand at the top of the standings with eight points.

In another match, Mizoram went down by 29 runs to Nagaland despite tons by Pratik Desai (141) and Taruwar Kohli (108).

Senate Confirms Linda Thomas-Greenfield AS Biden’s Ambassador to the U.N.

Pandemic Insurance Helped the N.C.A.A. Tournament and Others

Stars Aligned: McDavid and Matthews Set, and Keep, the Pace

Canada Catches Up in the Race to Produce Zero-Emission…

Aging Beer in a Sunken Ship Sounded Like a Good Idea.…

DSS Did Not Attempt To Arrest Sunday Igboho – Spokesperson

Texans Demand Answers as They Grapple With Storm’s Lingering…

Democrats scramble to salvage a minimum wage proposal ahead…