The 23-year-old Instagram model had on a light blue hoodie and washed out widecut jeans while out for a lunch with friend Kelsey Calemine at Croft Alley on Thursday.

The Savage/Fenty model still flaunted her toned abs with a tummy-bearing black crop top peeking out from underneath her hoodie for the outing. 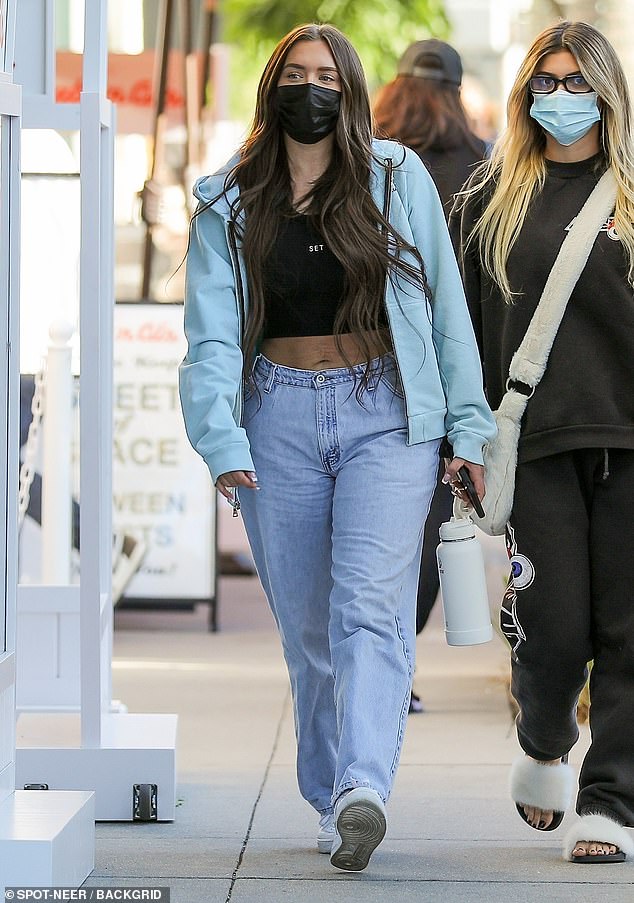 Her long, wavy brunette tresses hung loose as she made her way to the restaurant. She sported white sneakers as she was joined by friend Kelsey for the trip.

The 22-year-old kept a white furry messenger bag to hold her belongings as her blonde locks laid in front of her shoulders. 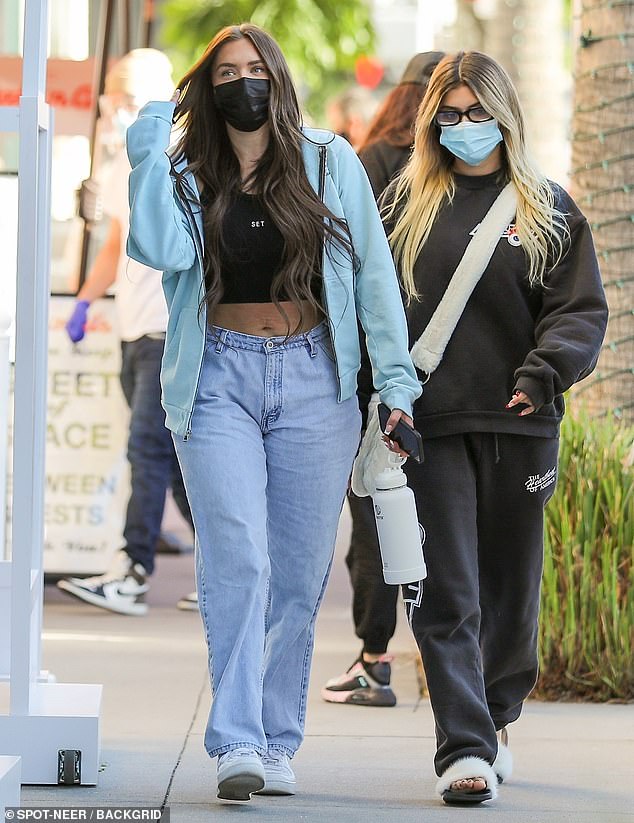 Comfort first: Stassie’s long, wavy brunette tresses hung loose as she made her way to the restaurant, joined by friend  – and fellow Instagram influencer – Kelsey Calemine for the trip

Absent from the trip was Sassie’s reported beau Noah Centineo (To All The Boys I’ve Loved Before) who she has been linked to since October when they packed on the PDA on Halloween.

The model is best known for the more revealing garments seen on her Instagram account, some of which she posted earlier that day.

She shared two snaps on Thursday as she laid on a bed while posing in lacy pink lingerie, penning a suggestive caption ‘come back to bed.’ 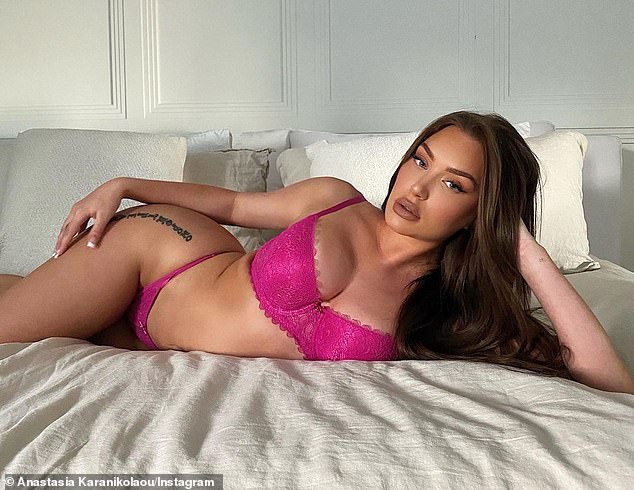 Bed head: Karanikolaou posed on a bed in lacy pink lingerie as she suggestively beckoned in her caption ‘come back to bed’ with a kissy face

In the busty snaps, Stassie arched her back in the fuchsia lingerie set as she flaunted her curves.

She wore her seductively tousled brown tresses down, resting her hand on her hip to draw more attention to her backside.

Just another day in the office, she tagged an influencer-centric brand in the post – the sexy snaps being her version of work.

Kendall Jenner was quick to like the post as she supported her good pal’s ‘thirst trap’ – one way to repay Stassie for supporting her new 818 Tequila venture.

Stassie recently accompanied Kylie and Kendall on a vacation to Jalisco, Mexico – the location of 818’s distillery – and was one of the first to try the elusive product.

The family and their friends had been coyly teasing the product on social media for months, as the influencer posed with one of the bottles in the background at their luxury villa. 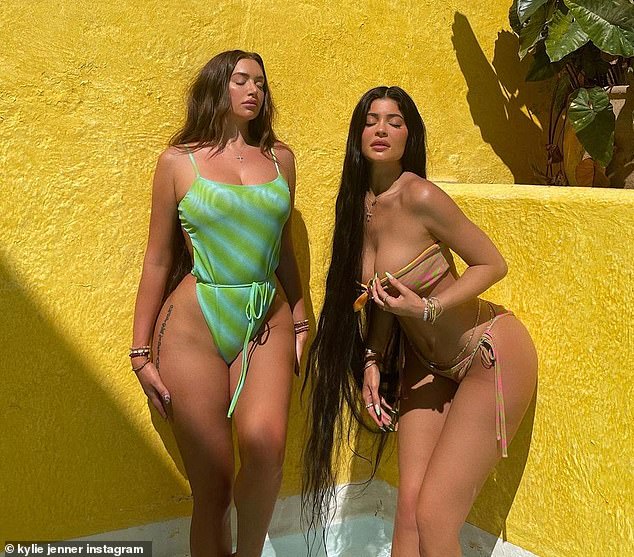 Eagle-eye fans were quick to notice a pattern upon seeing the bottle floating around their close inner circle, with many even suspecting that the tequila was Kylie and Stassie’s joint venture.

Finally debuting the product and her ownership over 818 on Tuesday, Stassie and other pals were seen cheering Kendall on as she brought them a bottle before they all took shots.

Stassie congratulated her best friend’s sister as she wrote ‘Congrats Kenny!!! so excited for people to try!’ 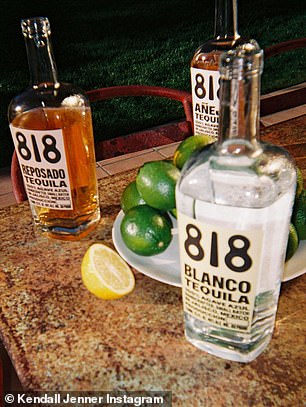 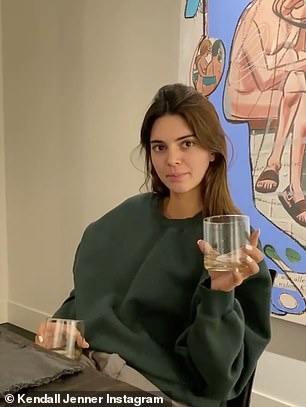 Taking ownership: The 25-year-old supermodel announced the launch of her 818 Tequila on Tuesday saying it had been a ‘four year’ process 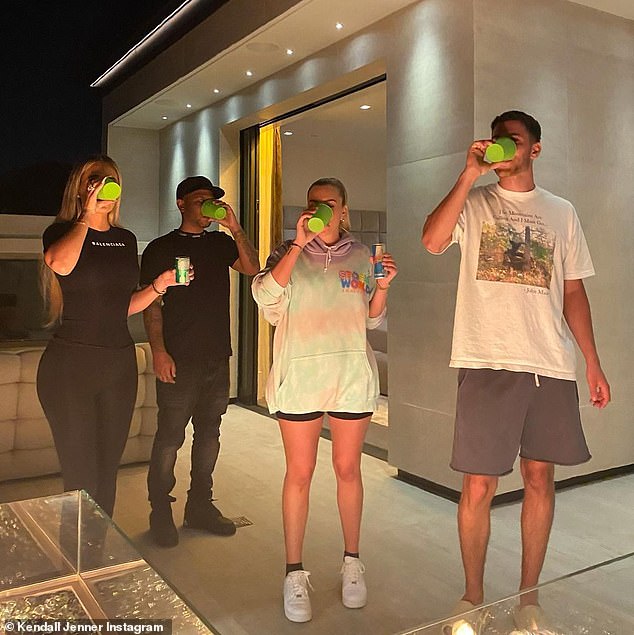 Early treat: Stassie, Kylie and other Jenner pals were among the first to try her 818 Tequila, with many having elusively posted photos with the bottle over the past few months

Despite overwhelming praise from those closest to her, the model was met with backlash from many members of the LatinX and Mexican communities, as social media users called her a ‘colonizer’ with no knowledge of Mexican heritage or the product’s history.

George Clooney and The Rock, who also own tequila companies, have not received the same backlash which makes the fuss over Jenner seem sexist.

People were quick to slam Jenner for the incorrect bottle label that should have read ‘tequila blanco’ per the Spanish language, with others saying that it was ‘white-washed’ for her to name a Jalisco-based product after her Calabasas area code.

She announced the product on Tuesday calling it a four-year ‘journey to create the best tasting tequila,’ as she was seen comparing two products before deciding on her winner – the new go-to KarJenner drink of choice. 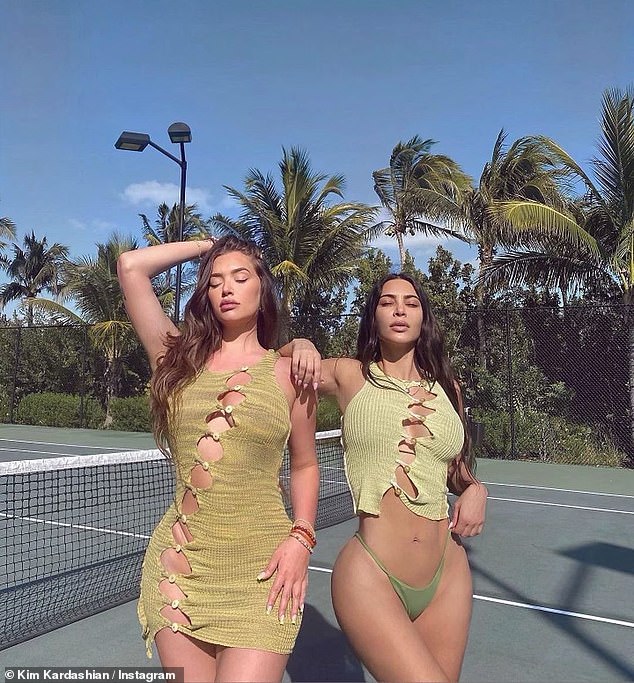 Kardashian twin: Stassie is considered part of the Kardashian family. Kim posted this image earlier this month with the caption, ‘The new Kylie and Stass! #SisterSwap’

Watch Live: Biden delivers remarks in Michigan about the pandemic.

How to Pretend You’re in the Riviera Maya, Mexico, Today

Hundreds of Girls Abducted From Nigerian School Are Freed,…

The Best Movies and TV Shows New to Netflix, Amazon and Stan…

In Their Own Words: Why Experts Say Elementary Schools…

How to Pretend You’re in the Riviera Maya, Mexico, Today

NBA Hall of Famer Shaquille O’Neal ready to rumble in…

On this day: Virat Kohli’s boys beat South Africa to…

India vs England: Jack Leach eager to learn subtleties of…