The Covid-19 coronavirus vaccination campaign in Russia has been underway since last December, but so far, only four percent of the population has been vaccinated.

The country’s flagship shopping mall on the Red Square was the first vaccination station in Russia to be opened outside a medical institution. Direction signs posted among the window displays state that the station is situated on the second floor, on the premises of a former bookstore. Reminders are broadcast on the public address system that anyone who wants to can be vaccinated, without appointment. But there is an absence of long lines at the entrance to the vaccination station and at some hours it is quite literally deserted.

After several months of the mass vaccination program, it’s the same situation in other shopping centers in the capital with high footfalls: half-empty vaccination stations and people walking past carrying the shopping bags of popular retail chains. 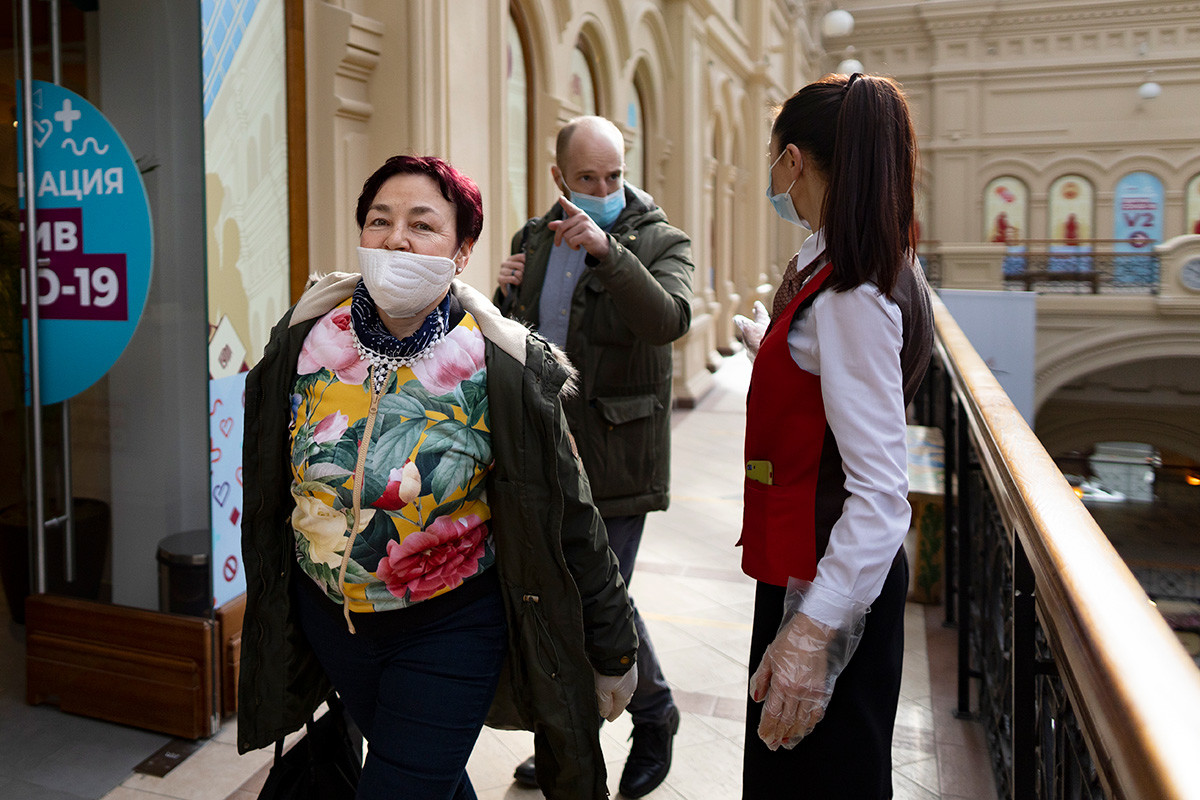 “There are sufficient vaccines, there are a lot of vaccination stations and new ones are opening. And the logistics have also been sorted out. But the throughput of people is insufficient. People are not coming to get vaccinated,” states Valery Fedorov, general director of the Russian Public Opinion Research Center (VTsIOM). Pollsters monitor the vaccination situation every month – and the results are consistently bad: Over half of Russians are against the Covid-19 vaccines.

Outside Moscow, the situation is somewhat different: There are no vaccination stations at shopping centers; it’s all done by appointment and there have been interruptions with vaccine supplies. But Russia continues to remain a country with the most accessible vaccines in the world – to date, it already has three registered vaccines being produced on a mass scale: Sputnik V, EpiVacCorona and KoviVak.

At the same time, according to the latest figures, 11.4 million people, or 7.8 percent of the adult population, have received one of the two doses of the vaccine (and a little over half that number – 4.4 percent – have received two doses). This is much less than in other countries with their own vaccine production: In Great Britain, over 50 percent and, in the U.S., 40.5 percent of the adult population have received at least one dose. The current rate in Russia is at odds with the government’s plans: On March 22, Health Minister Mikhail Murashko announced that the plan was to vaccinate about 30 million Russians (roughly 20% of the population) by June 15.

Sputnik V is so far the main and leading vaccine being manufactured in the country. It was the world’s first registered Covid-19 vaccine. But almost immediately after its registration, a feeling took hold in Russia and abroad that there was something wrong with it. The trouble was that it was registered “under limited conditions” – in other words, without having undergone lengthy trials. 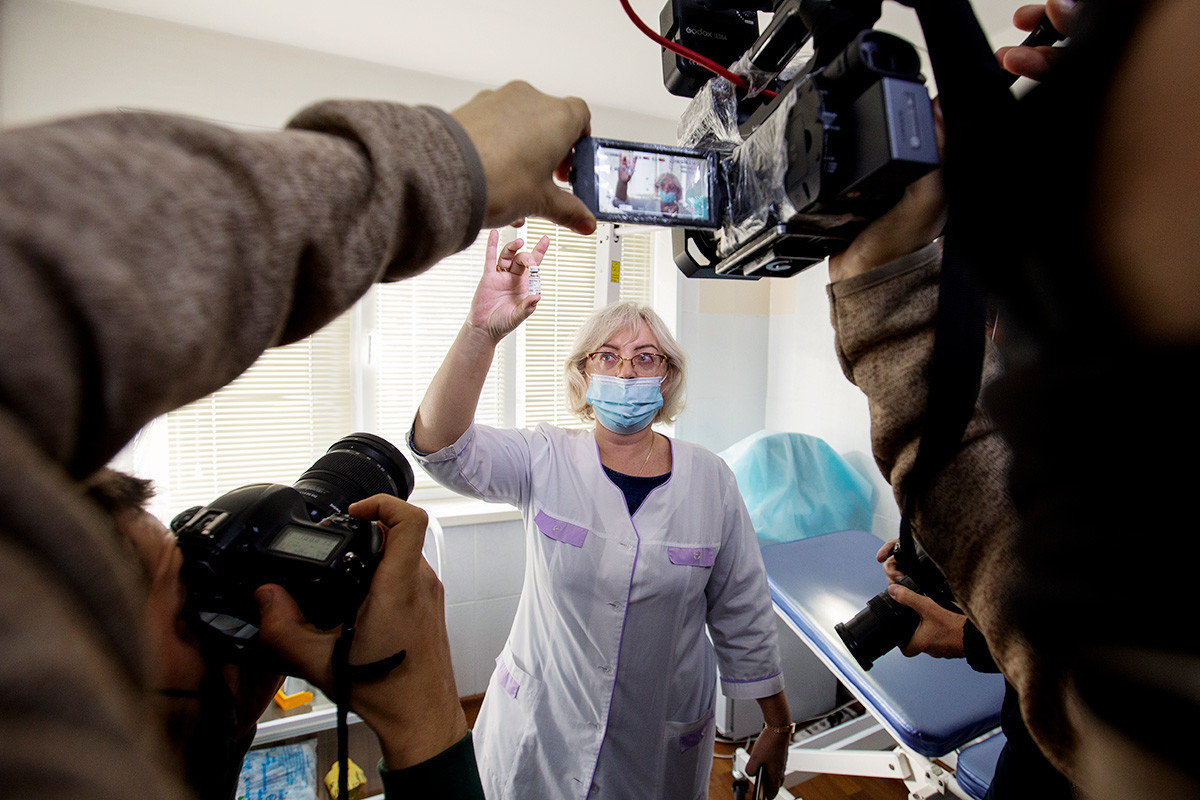 “There can’t be any confidence in a vaccine made in just a few months. I don’t belong to the category of people who don’t believe in Covid. A close relative was ill with it and it was very scary. But not so scary as to make one run to get injected with someone’s ambitions,” writes a contributor to a forum popular with psychologists and their clients.

“It’s perfectly normal to be fearful. That’s because the vaccine really was improvised in a rough and ready way. At least 2-3 years are supposed to elapse from the development of a vaccine to its roll-out and sometimes more,” according to Anna Doshevskaya from Moscow.

Even a subsequent article the developers published in The Lancet, one of the most prestigious medical journals, in which they set out the vaccine’s good performance indicators, failed to overcome “first impressions”. According to Levada Center opinion polls, as of March 1, 2021 the number of people willing to get the vaccine had been going down for several months and the leading cause of this refusal to be vaccinated is a fear of side effects. According to the same polls, the opinion that “the vaccines were made in a hurry and no-one knows what the effects might be five years or so from now” is one of the most popularly-held views.

People have dismissed the authorities’ pronouncements that anyone being vaccinated is not advised to drink alcohol for 42 days after the jab and two weeks before. In the event, these recommendations were softened to “drinking in moderation is allowed after all”. Neither the lure of free ice cream, nor Moscow Mayor Sergei Sobyanin’s promise to unblock subsidized travel passes, nor public information advertising on roadside billboards in the regions have helped.

The head of scientific research at pharmaceutical venture fund Inbio Ventures, Ilya Yasny, shares this view: “It’s evident that confidence was undermined when the vaccine was prematurely registered on the basis of the results of a trial involving 20 people [in actual fact, 76 people took part in the combined phase I and II trials – ed].” He believes that confidence in the vaccine could be increased by greater openness over vaccine data: Russia does not yet have a national database of information about vaccine supplies and available stocks and the possibilities of getting one of the three vaccines. To get this information, people have to ring outpatient centers direct or enquire at their regional Ministry of Health offices.

“There were no slots. They put us on the waiting list. The ministry spent a long time reviewing and switching [dates]. We were only notified at 17:42 that we had been expected for a jab at 08:40. Two days later, a polite girl contacted us to ask why we hadn’t turned up,” says Yekaterina Demidenko from Sochi. “How to get a Covid jab in Sochi? I’m not even going to try,” writes another resident Viktoriya Anipchenko.

Vaccine supply problems and shortages are being reported not just by the regions themselves, but also by Immunotekhnologii, the official organizer of vaccine supplies. The main reason for the glitches at the start of the mass vaccination campaign was said to be the strictest cold chain in the world: “Basically, the vaccine can’t be kept at over -18C for even five minutes [to ensure its properties are maintained],” Ivan Glushkov, the deputy CEO of Immunotekhnologii, explained with reference to Sputnik V. 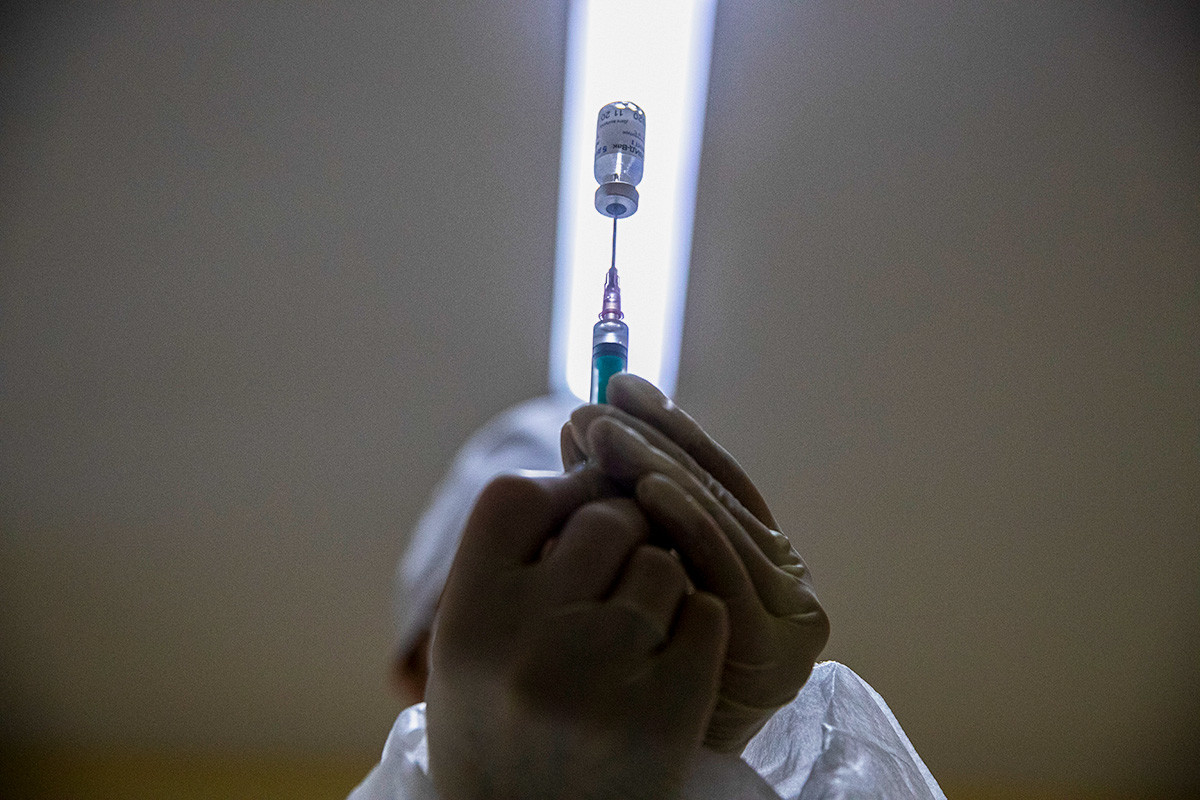 It is this factor that has prevented doses from being rapidly rolled out and all regions from being supplied in equal measure. “The trouble is that all the logistics centers throughout Russia and the world as a whole are geared to temperatures of between +2C and +8C. This was agreed back in the 1970s-80s. These have been the common standards for the storage of medications,” explains Yekaterina Kurbangaleyeva, member of the Russian Federation Civic Chamber and head of the Osoboye Mneniye research center. “The chief medical officer in one region was telling me that they had to deliver the small batches that were coming in on ambulances. Our country is enormous and time is needed for everything to arrive, to be rolled out and to be stored.”

But in January 2021, the developers improved the vaccine and the Ministry of Health permitted it to be stored at above-zero temperatures. Nevertheless, reports of shortages are coming in from almost everywhere with the exception of Moscow, something that, according to officials and experts, is being blamed on a shortage of production capacities. The Kremlin officially does not acknowledge the vaccine shortage – according to the Russian Federation President’s press secretary Dmitry Peskov, it has “no information” that demand for jabs is exceeding supply. At the same time, Russia does not as yet have any foreign vaccines and neither are there any approximate dates when they might be registered. The only exception is the Sputnik V made outside Russia. Such vaccines “will be able to enter” the Russian Federation in order to speed up the rate of vaccination.

Conspiracy theories and lack of incentive

In Russia, as a whole, attitudes to vaccination are not very positive because of widespread conspiracy theories and the anti-vaxxer movement, the views of which are disseminated in the officially registered media, in Telegram chat rooms and on YouTube channels, while social networking groups attract hundreds of thousands of subscribers. 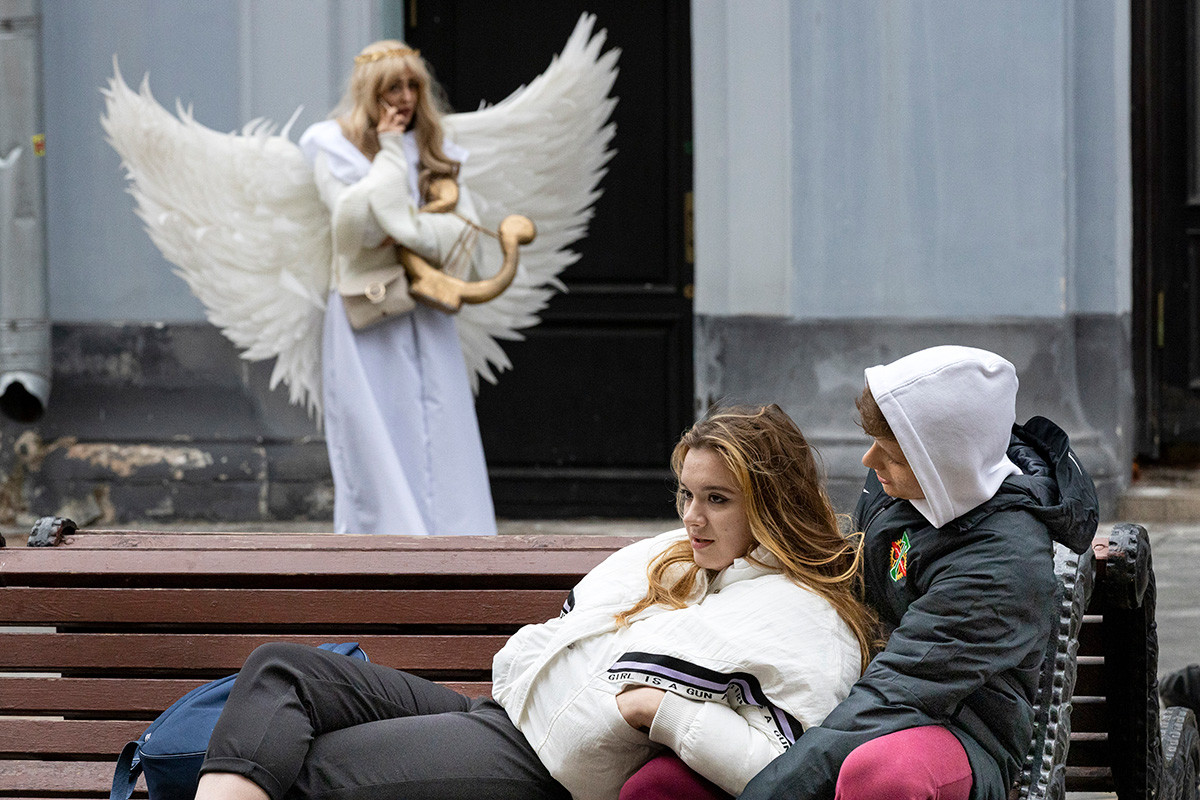 In the past year, the residents of North Ossetia have twice set fire to mobile phone masts (believing they were 5G masts), while Dagestan, Karachai-Cherkessia, Stavropol Territory and Kuban [Krasnodar Territory] have seen spontaneous rallies against their installation. There is a popular conspiracy theory according to which the radiation from mobile communications suppresses the immune system and people are more liable to infection from Covid-19 as a result. In Yekaterinburg in the Urals, on March 17, protesters pitched tents at a site where installations are being built, even though they had nothing to do with 5G either. All these people are against vaccination, while many Russians also believe that the novel coronavirus was artificially developed as a biological weapon.

But these are not the only reasons. Russians may be unwilling to opt for the jab, simply because they have no incentive to do so. The majority of restrictions in Russia have long been lifted – there is no ban on travel between regions or on mass gatherings, eating establishments are not closed and there are no other measures in place with a tangible impact on people’s quality of life. All this has been taking place against the background of falling case numbers in the country. Only a steep rise in the incidence of the disease and a jump in the hospitalization rate could spur Russians to get vaccinated, according to Professor Dmitry Kulish of the Center for Entrepreneurship and Innovation at the Skolkovo Institute of Science and Technology. However, there are those who won’t take it under any circumstance. They state that if the survival rate from Covid-19 for those under 65 years old is above 99% and the most effective vaccine has been advertised as 91%, they see no need to take it.

The whole world is now talking about a potential third wave, however, the Kremlin has refuted such a notion. At the same time, in Moscow since late March, there has been a rise in case rates and hospitalizations, and deaths are also on the rise. There is no similar alarming dynamic in the regions so far.

China warns US it will be defeated in war