Gogglebox star Tom Malone Jr has shared a sweet series of snaps of his never-before-seen brother Lee on his older sibling’s wedding day in Trafford.

Taking to Instagram, Tom, 26 – who appeared for six years on the hit show alongside his parents, brother and their beloved Rottweilers – gushed about the big day and told Lee’s pregnant fiancée Sarah: ‘Welcome to the family!’

The TV personality looked dapper in a beige jacket while Lee opted for jeans and an off-white blazer, with Sarah looking gorgeous in a delicate polka dot dress while cradling her bump. 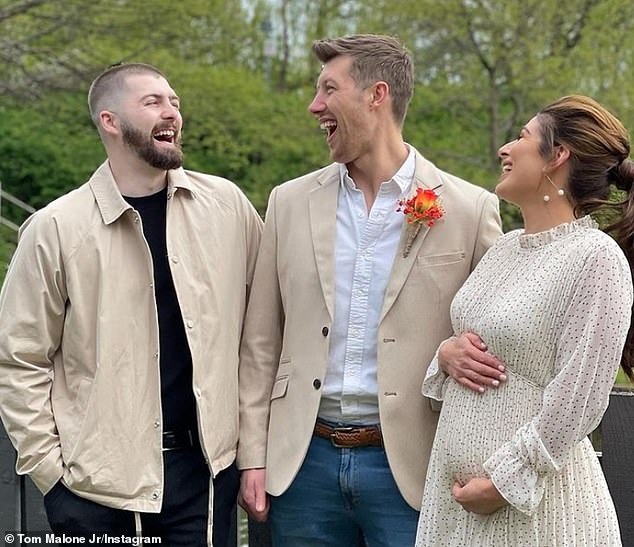 Family: Gogglebox star Tom Malone Jr, 26, has shared a sweet series of snaps of his never-before-seen brother Lee on his older sibling’s wedding to pregnant fiancée Sarah  in Trafford

In a second snap, Lee and Sarah beamed from ear-to-ear as they posed with flowers on the steps of Trafford Register Office.

A third photo showed the parents-to-be holding up a baby grow for the camera.

Tom wrote in full: ‘A massive congratulations to my older brother @lee_malone and his new wife @swa1ker!!! Welcome to the family!!!

‘And as a combo deal we don’t just get one new Malone…they’re expecting another one in November!!! Couldn’t be happier for you both!’ 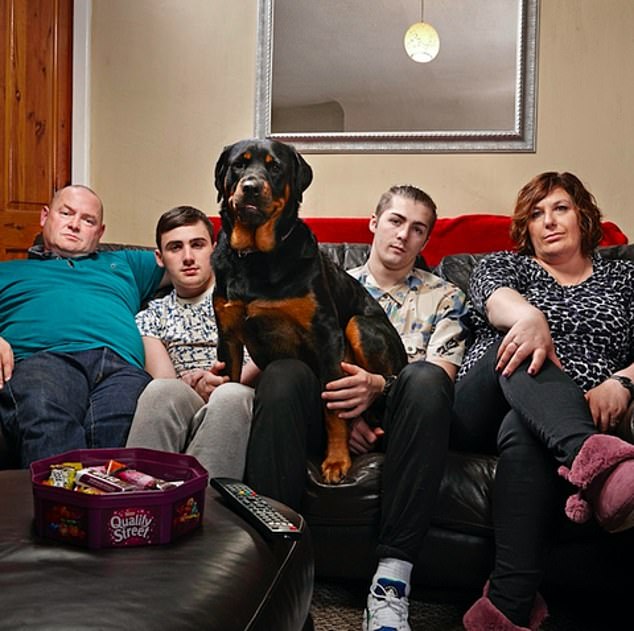 Gogglebox: Tom rose to fame on the Channel 4 show alongside his parents Tom and Julie and siblings Shaun and Vanessa

Lee has notably never appeared on Gogglebox alongside his parents Tom and Julie and siblings Tom Jr, Shaun and Vanessa.

It comes after Tom announced that he was leaving Gogglebox in February after a six-year stint.

Taking to social media, Tom posted: ‘So after 6 and a half years it’s finally time to put down the remote, and to say goodbye to Gogglebox. 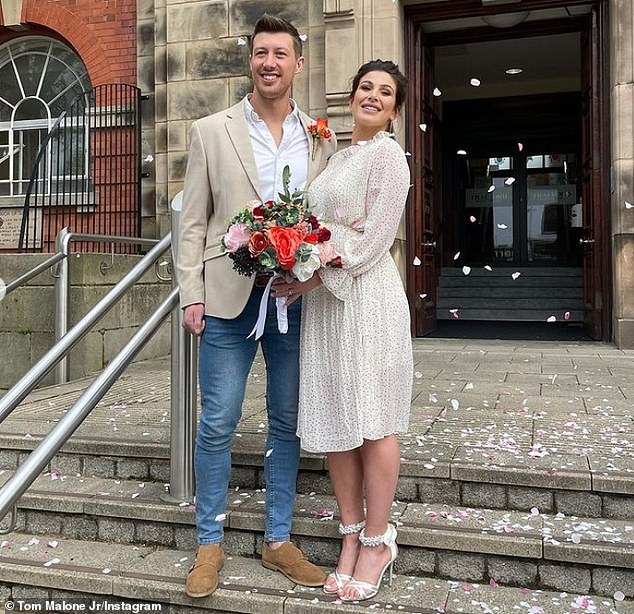 Happy: In a second snap, Lee and Sarah beamed from ear-to-ear as they posed with flowers on the steps of Trafford Register Office 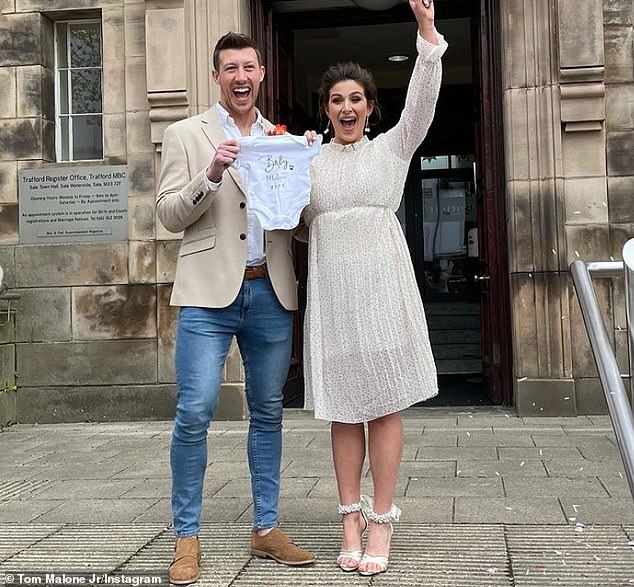 A new Malone on the way: A third photo showed the parents-to-be holding up a baby grow for the camera 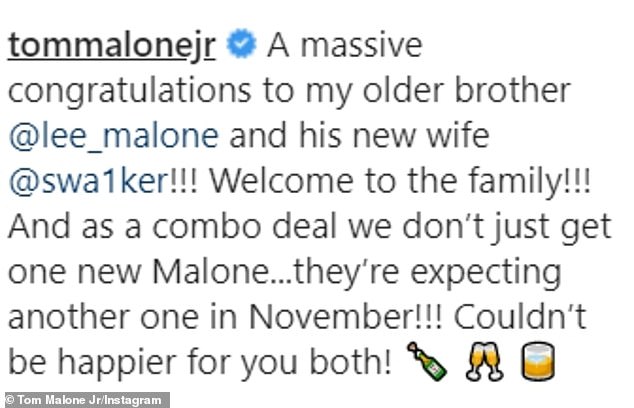 Proud brother Tom wrote: ‘A massive congratulations to my older brother @lee_malone and his new wife @swa1ker!!! Welcome to the family!!!’

‘I’ve loved every minute and I’m eternally grateful to @channel4 and @studiolambert for allowing me to be a part of the show.

‘But new opportunities are knocking on the door and it’s time to explore them.

‘I look forward to enjoying the show as a viewer and not having to worry about having said something stupid.

‘PS. Don’t worry my family @themalonesgb and @shaunmalone95 will still be on the show to keep you guys entertained every Friday. To the future.’ [sic]

In December, he slammed racist trolls for targeting his girlfriend Bryony Briscoe, who is of mixed heritage, when they took part in a Q&A session.

They were asked by a fan what challenges they face by being in an interracial couple.

Hitting out at those who send them racist remarks, Tom said: ‘I mainly just get trolls. They are always behind a fake account and they just post like the usual stupid things like monkey emojis that clearly aren’t original.’

Bryony claimed she’s often called a ‘wannabe slave’ by trolls, as she went on: ‘I also get people telling me not to date outside my race.

‘But, they don’t realise that I am mixed race and then when they realise that it is “well, you are what your father is” and I become white, so what is it?’ 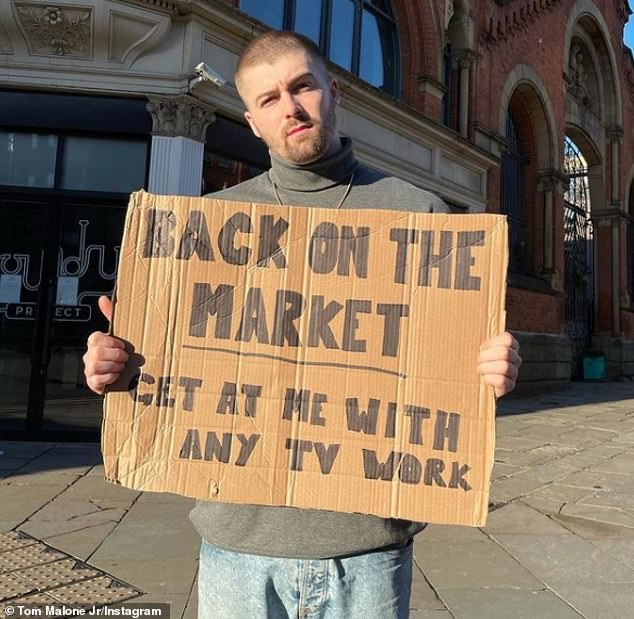 On the market: Gogglebox ‘s Tom announced he was quitting the show after six years in a post shared in February

Tom said that those in interracial relationships such as them should just ‘be happy’ as trolls shouldn’t have an impact on who they want to be with.

He explained: ‘Yeah, at the end of the day just be with who you wanna be with and be happy because these people aren’t even brave enough to have their own name or faces on their account, so just p**s them off even more by being happy because that’s the biggest middle finger.’

Tom and Bryony revealed that they had moved in together in December, as they shared a collection of sweet snaps and toasted to ‘new beginnings’.

Posting the picture to both of their Instagram accounts, Tom captioned it with: ‘To new a home and new beginnings,’ followed by a champagne emoji.

While Bryony sweetly penned: ‘Home is wherever you are [purple heart emoji] Cheers to us and new beginnings,’ followed by a house emoji. 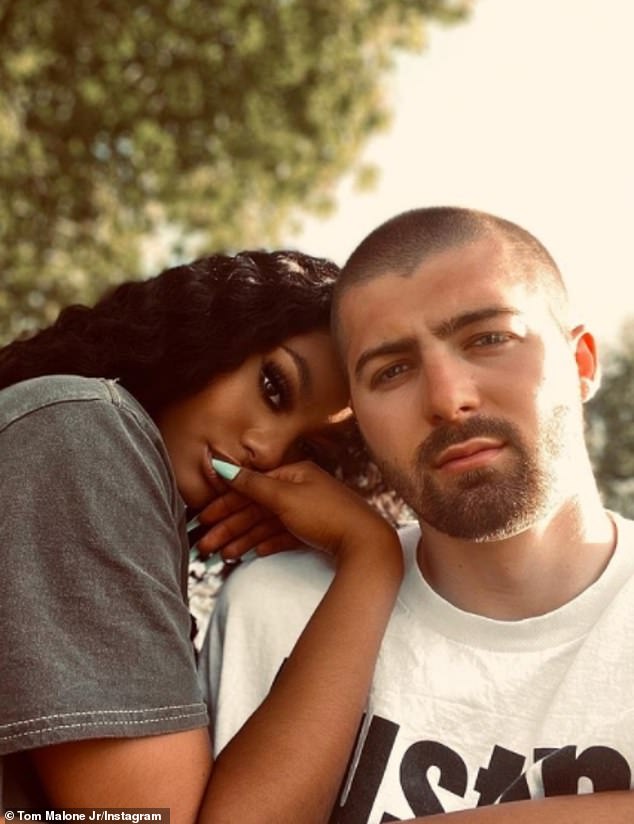 Michael Jordan Jersey from UNC Days Sold for an Insane $1.38...