Giovanna Fletcher has praised Meghan Markle for speaking so candidly about her miscarriage, saying it was ‘admirable and amazing’ to share such a ‘raw’ experience.

The I’m A Celebrity winner, 35, has previously discussed how she miscarried when she was six weeks pregnant before welcoming her eldest son Buzz, now six.

Speaking after her stint on the show in Wales, Giovanna told The Sun: ‘It’s amazing to hear that Meghan has spoken about it, I’d love to interview her on the podcast. 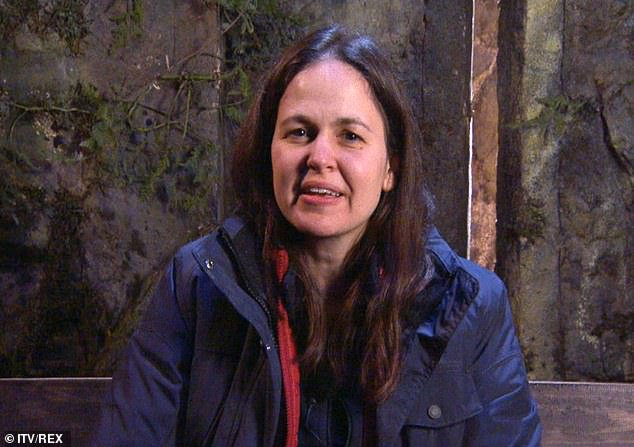 Support: I’m A Celebrity’s Giovanna Fletcher has praised Meghan Markle for speaking candidly about her miscarriage, saying it was ‘admirable and amazing’

‘I think it’s so admirable and amazing for her to share what is a really raw and upsetting thing to go through.’

She added: ‘I had a miscarriage before Buzz and it took me years to be able to talk about it, but once you do it’s hugely comforting to know that you’re not alone.’

Giovanna, who is also mum to Buddy, four, and Max, two, continued that she believes it is important to be ‘open’ about miscarriages as hearing others speak about it can help with finding the words to ‘understand what you’re going through’.

The Duchess of Sussex discussed her miscarriage and described the ‘unbearable grief’ it caused her and Prince Harry in an article for the New York Times last month. 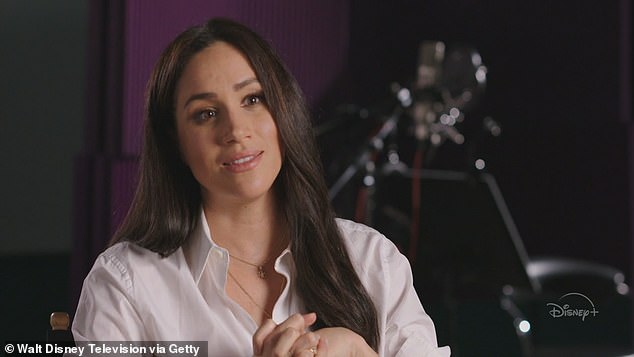 Candid: The Duchess of Sussex, 39, revealed she had miscarried her second child in an article for the New York Times last month

Meghan, 39, revealed how she lost her second child after feeling a ‘sharp cramp’ while changing her son Archie’s nappy in July.

She revealed how she fell ill at home in Los Angeles before going to hospital, describing herself tearfully watching her husband Prince Harry’s ‘heart break as he tried to hold the shattered pieces of mine’ while grieving for their unborn baby.

She wrote in the New York Times: ‘After changing his [Archie’s] diaper, I felt a sharp cramp. I dropped to the floor with him in my arms, humming a lullaby to keep us both calm, the cheerful tune a stark contrast to my sense that something was not right’.

In the piece called ‘The Losses We Share’, she said: ‘I knew, as I clutched my firstborn child, that I was losing my second’. 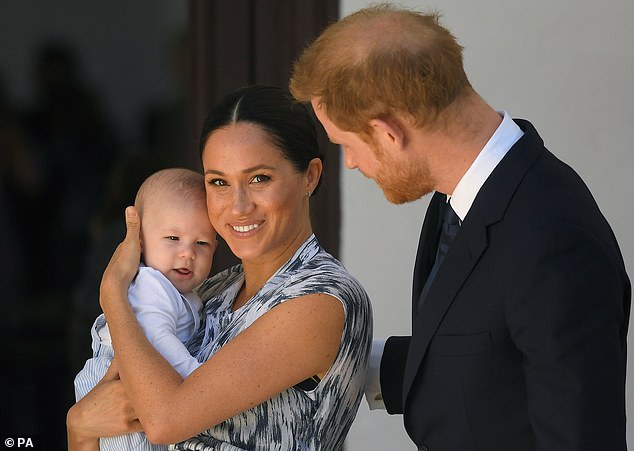 Family: Meghan said she ‘knew, as I clutched my firstborn child, that I was losing my second’, in the very candid piece (pictured with Archie and Prince Harry in October 2019)

Meghan wrote: ‘Hours later, I lay in a hospital bed, holding my husband’s hand. I felt the clamminess of his palm and kissed his knuckles, wet from both our tears.  Staring at the cold white walls, my eyes glazed over. I tried to imagine how we’d heal’.

She added: ‘Losing a child means carrying an almost unbearable grief, experienced by many but talked about by few’.

It is not known how pregnant Meghan was, but most women suffer miscarriages in the first 12 weeks.

Giovanna first publicly discussed her own miscarriage in 2017 and later revealed that she lost her first child at six weeks pregnant. 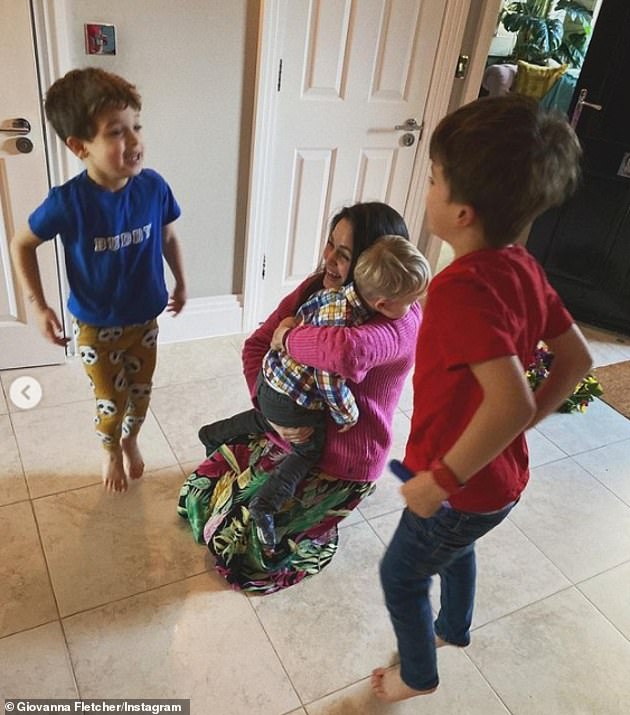 Sweet: On Saturday, I’m A Celebrity winner Giovanna was reunited with her three boys Buzz, six, Buddy, four, and Max, two, and husband Tom as she finally returned home from the camp

Discussing her experience as part of Heat’s campaign Where’s Your Head At? in 2018, the mum-of-three said: ‘It feels like such a lonely grief.

‘For me it happened at 6 weeks so before we had really told anyone, so then when you are telling people, you’re not only telling them that you were pregnant but that you’d lost a child.

‘I felt like I’d failed me, I’d failed Tom, I’d failed the baby. It was my first taste of motherhood and I think it affected me in a really bad way.’

Giovanna also discussed being ‘scared’ to speak about her miscarriage at first when she opened up about it for the first time.

Speaking at BUILD Series London in 2017, she said: ‘When it comes to miscarriage I think we’re all too scared to say something. I felt like I could never say anything to friends because people feel like it’s contagious. 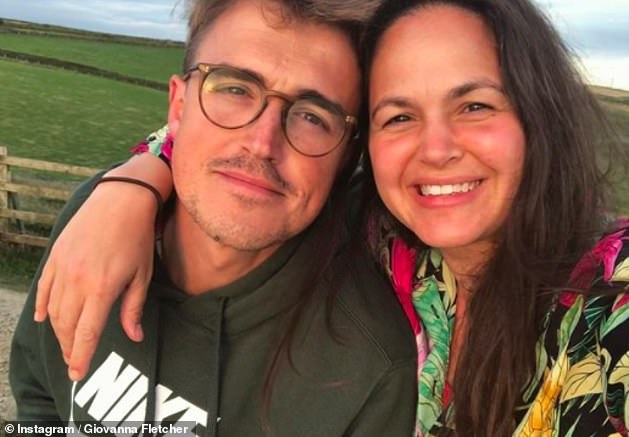 Couple: Giovanna first publicly discussed her own miscarriage in 2017 and later revealed that she lost her first child at six weeks pregnant (pictured with her husband Tom)

‘It’s a really rubbish thing that happens and it happens to so many people. All you really want in that moment is a hug.

‘You feel like your body has failed you and that’s your first experience as a mother.

‘I fell pregnant very quickly and I had this thing in my head that it was just too easy. After being worried for so long that it wouldn’t be easy it just happened.

‘And then I miscarried not long after that and I think part of me felt that would happen, because I felt that it was too easy.

‘Because I felt that I hadn’t earned it. If that didn’t happen I wouldn’t have Buzz and Buzz will forever be my silver lining.’

Giovanna, who is the author of Happy Mum, Happy Baby, also said that she hoped by speaking about her miscarriage, other women would feel ‘less alone’.

She told OK!: ‘There are also so many people who go through miscarriages and when people start talking about it, they feel less alone.’

For confidential support please contact the Miscarriage Association on 01924 200799 or email info@miscarriageassociation.org.uk 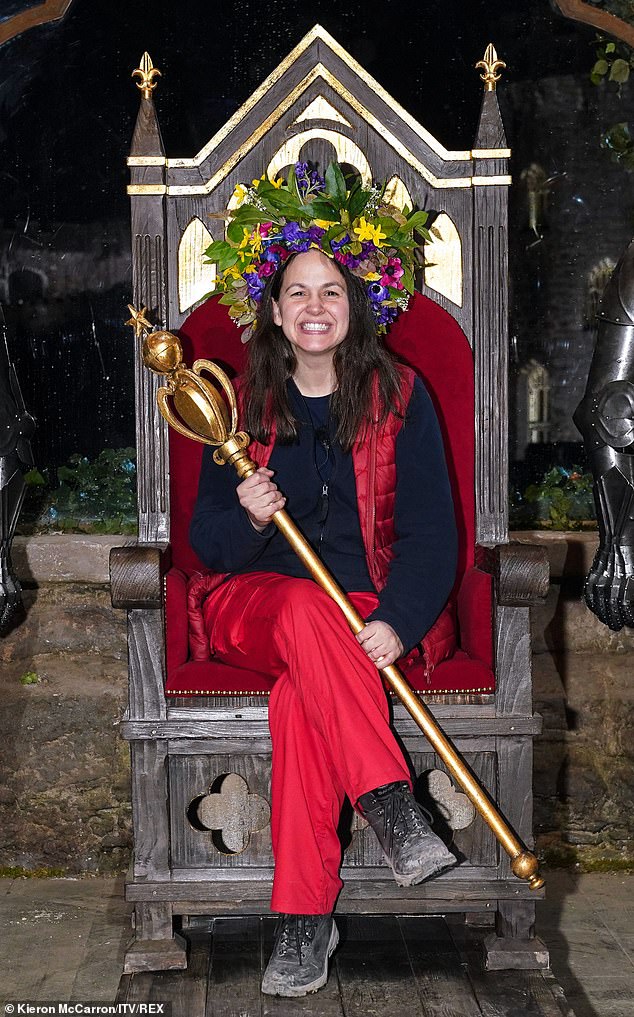 Reunited: Giovanna was crowned Queen of the Castle on Friday night, beating Jordan North and Vernon Kay in the final public vote

What is Iskra Lawrence’s net worth?

What is Eamonn Holmes’s net worth? This Morning presenter’s wealth revealed

What is Omarosa’s net worth?

What is Sandra Bullock’s net worth?

Bachelor in Paradise 2018 spoilers: Venmo John net worth, plus who does he end up with?

A Push to Move the Golf Course Atop a Native American...

A Push to Move the Golf Course Atop a Native American...