Christina Ricci and estranged husband James Heerdegen have reach a custody arrangement after their contentious split prompted accusations of abuse from both sides.

The arrangement was submitted to the Los Angeles County Superior Court last month and a judge signed off last week, according to documents obtained by Page Six on Tuesday.

The agreement will favor Ricci, allowing the actress custody of six-year-old son Frederick ‘Freddie’ Heerdegen after she relocates to Vancouver, Canada to film a new project. Heerdegen will have visitation rights. 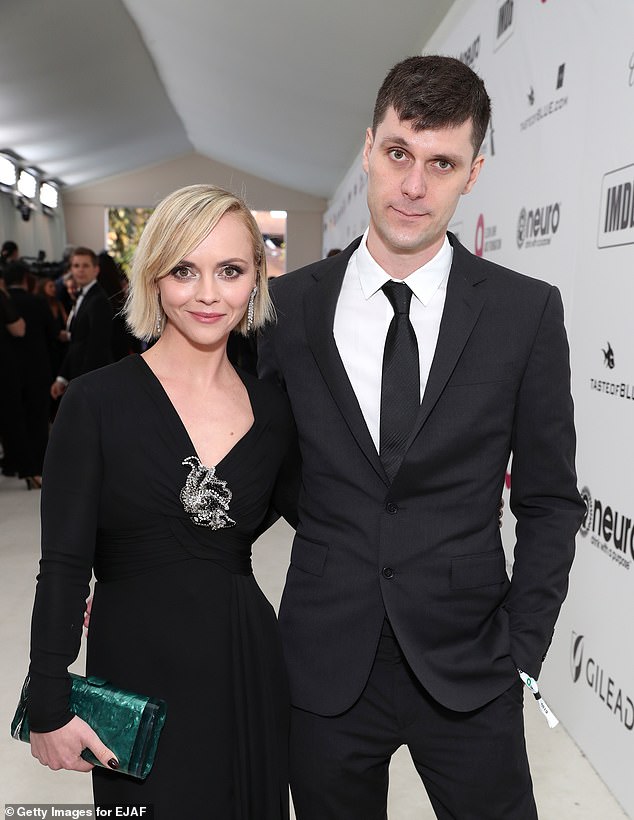 Agreement: Christina Ricci and ex James Heerdegen have reached a custody arrangement which will let their six-year-old son Freddie live with his mother in Vancouver, Canada while she shoots a project. His father will have visitation. They’re seen in 2019 above

Ricci has also agreed to pay ‘reasonable costs for travel and accommodations,’ which include ‘economy airfare’ for her ex. She will also get to choose where he stays during his visitation trips.

Heerdegen made shocking accusations while filing for a temporary restraining order, claiming his ex abuses alcohol and prescription drugs, making her a danger to their young son.

Heerdegen also claimed he had to check their son’s bottles of breast milk for fear of it being contaminated with alcohol she drank the night before.

His filing came just days after Ricci accused her estranged husband of physically abusing her.

She said she had to hide knives in the house because she feared Heerdegen could kill her after he allegedly said he would only feel sorry for her if she was ‘dismembered into small pieces’.

A judge granted Ricci a domestic violence restraining order against Heerdegen in early January, six months after she filed for divorce. 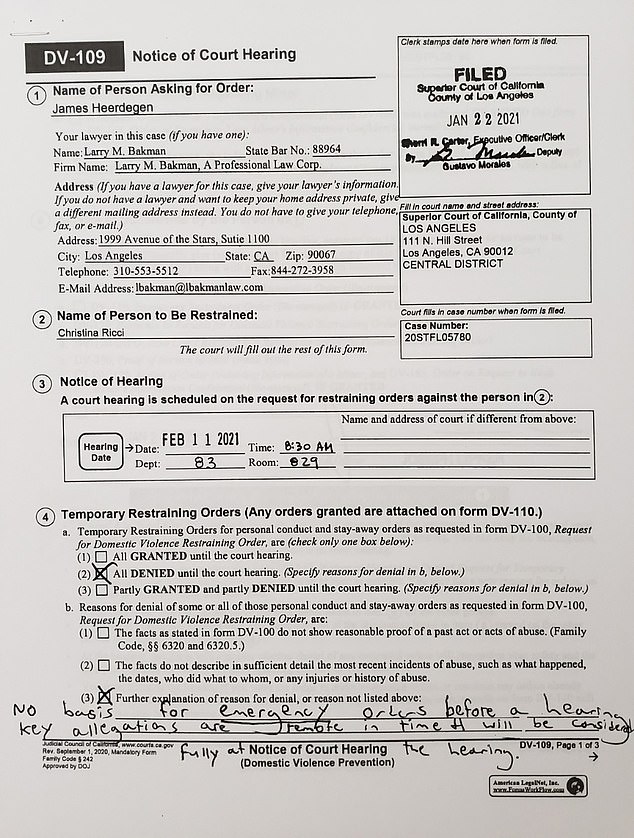 Back and forth: Both Ricci and Heerdegen accused the other of domestic abuse and filed restraining orders against the other. Ricci’s order was approved while her ex’s (above) was dismissed by a judge of the Los Angeles Superior Court 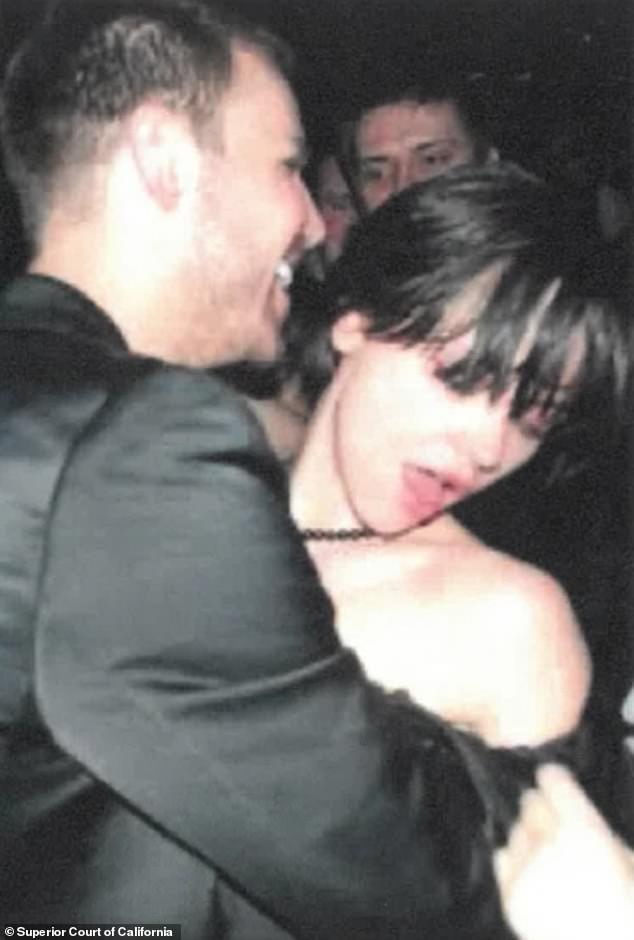 Embarrassing: He also included photos of Ricci ‘in a state of severe intoxication wherein she has ‘blacked out’ and is being passed around by numerous third parties who seem to find humor in the situation’

After Heerdegen request was denied his attorney Larry Bakman told DailyMail.com in a statement that, he still believes the court is ‘more concerned’ by the allegations made by his client than those made by Ricci.

‘Despite the Court’s denial of Mr. Heerdegen’s request for temporary orders, trial has been set on a far more abbreviated schedule than that provided to Ms. Ricci,’ he said.

‘A reasonable inference is that the Court is far more concerned with Mr. Heerdegen’s allegations particularly with respect to the best interest and safety of the couples’ child.’

In Heerdegen’s request he also included embarrassing photos of Ricci ‘in a state of severe intoxication wherein she was ”blacked out” and passed around by numerous third parties who seem to find humor in the situation.’

He says the photos ‘severely adversely affected my emotional calm and peace of mind.

The documents include messages between Ricci and Heerdegen where she apologizes for her alleged drunken outbursts. 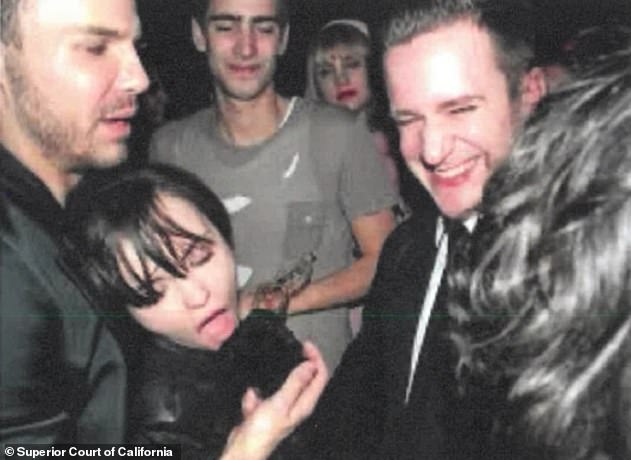 Distubing: He said the photos of a drunken Ricci ‘severely adversely affected my emotional calm and peace of mind’ 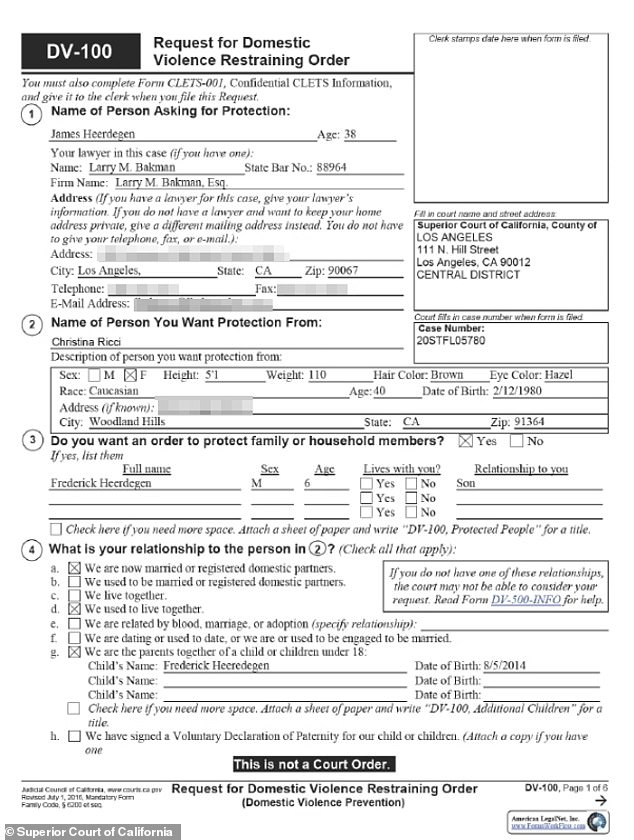 ‘I get it this time,’ Ricci writes. ‘This morning was a huge alert’.

In other messages Ricci he labels herself a ‘monster’ and says she’s ‘detoxing.’

Heerdegen claims at one point she was so drunk she fell over while holding their baby in her arms and says she would drive their son in a car while under the influence.

He also claimed that Ricci once terminated a pregnancy without his knowledge.

The actress has accused Heerdegen of allegedly beating her, throwing her into a fire pit and mocking her with pig noises before she filed for divorce in June last year.

Ricci’s allegations were included in a request for a domestic violence restraining order against Heerdegen, which a judge approved late on Wednesday.

Photos of bruises on her hands, wrists and arms were included in the court documents, which were obtained by TMZ, as proof of Heerdegen’s alleged abuse. 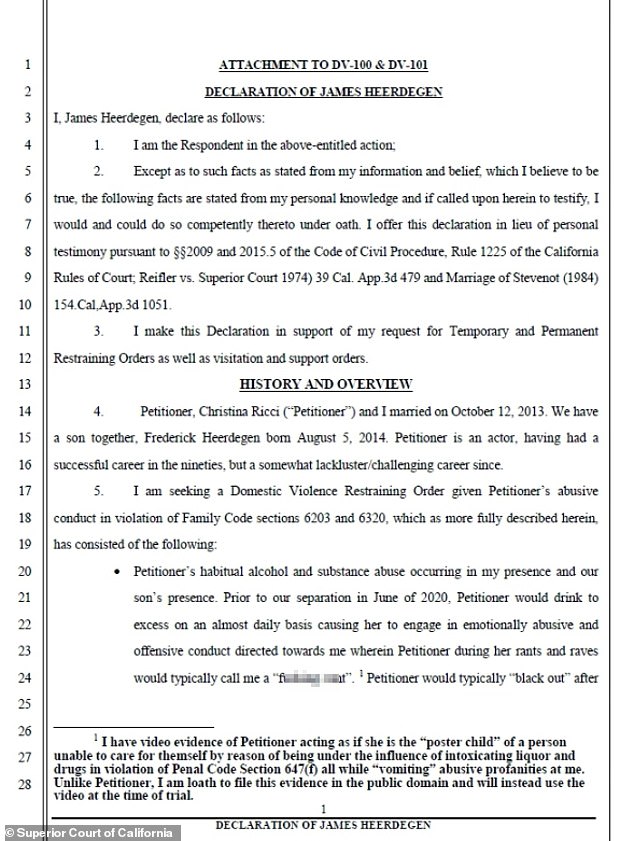 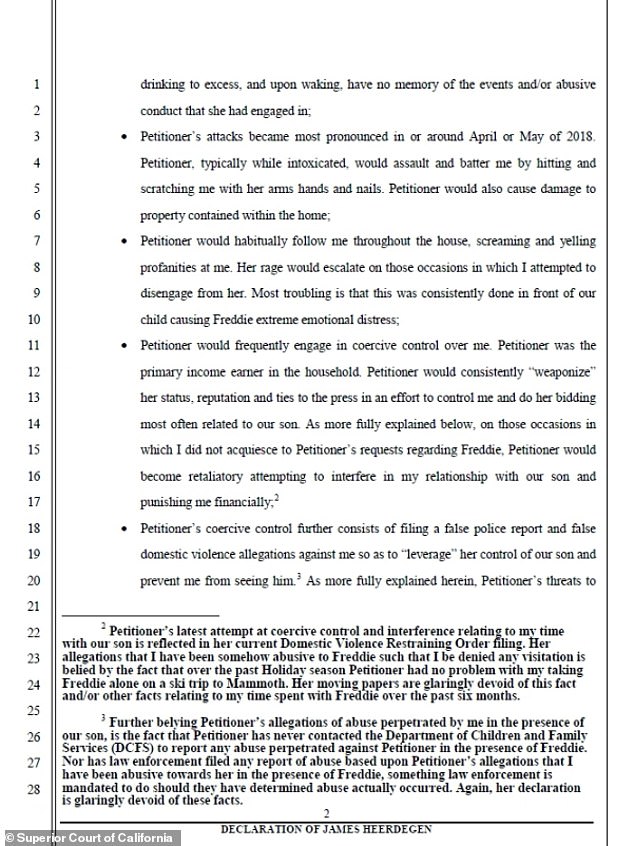 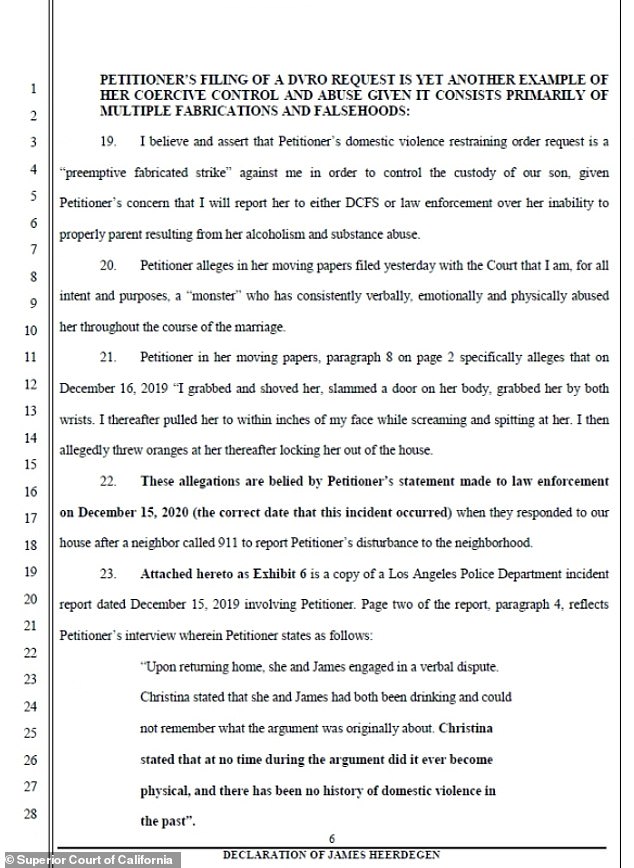 Filings: In court documents obtained by DailyMail.com, Heerdegen claims that Ricci would get into drunken rages in front of him and their six-year-old son Freddie. He claims he had to check baby bottles where she pumped her breastmilk for fear of being contaminated with alcohol she drank from the night before

But in Heerdegen’s filing, he claims any photos she has of her own bruising was caused by her hitting him.

Ricci’s attorney Samantha Spector said in a statement to DailyMail.com that Heerdegen’s filing is ‘nothing more than a transparently abusive attempt to silence my client. It will not work. Christina will not be intimidated by Mr. Heerdegen and his barrage of misleading claims – and she remains determined to protect her family.’

A judge ordered Heerdegen to remain at least 100 yards away from Ricci and their son Freddie. He also cannot have visitations with the boy and must stay away from the family’s dog.

He said Heerdegen, who works as a cinematographer, intends to file his own restraining order against Ricci that he claims will reveal ‘her abusive conduct fueled by alcohol and substance abuse’.

He also claims that her restraining order is a preemptive fabricated strike against him. 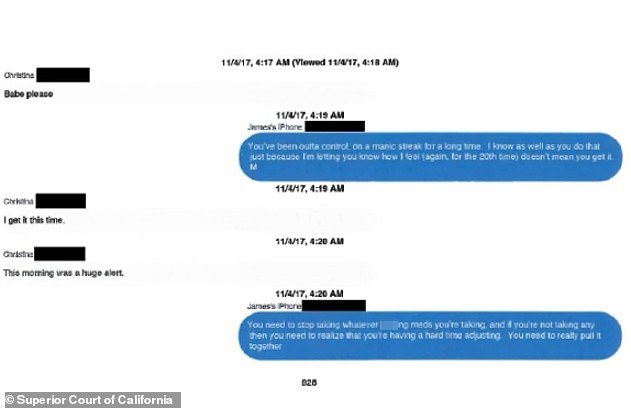 Texts: The documents include messages between Ricci and Heerdegen where she apologizes for her alleged outbursts. ‘I get it this time,’ Ricci writes. ‘This morning was a huge alert’. In other messages Ricci he labels herself a ‘monster’ and says she’s ‘detoxing’ 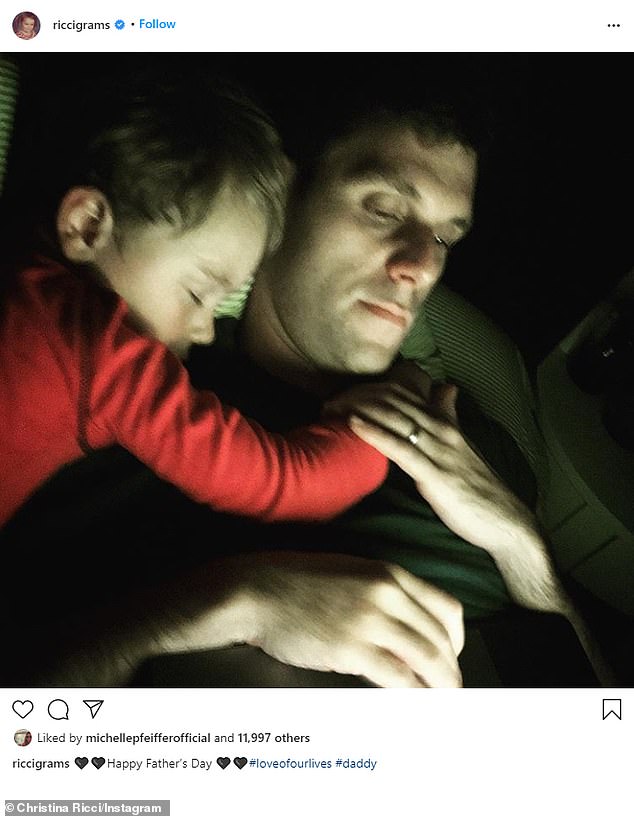 Claims: Heerdegen claims at one point Ricci was so drunk she fell over while holding their baby in her arms and says she would drive their son in a car while under the influence

In Ricci’s filing, she claimed the alleged abuse at the hands of Heerdegen started in late 2019.

During a family vacation in New Zealand that year, the Addams Family star claimed she feared Heerdegen ‘could kill me’ because of comments he made.

‘He said the only way he could feel sorry for me is if I were dismembered into small pieces,’ Ricci alleged in the filing.

‘That night I hid all the knives in the cabin where we were staying. I feared for my life and the life of our son. I slept in a separate bedroom with Freddie and I locked the door.’

She claims Heerdegen ‘brutally attacked’ her in December 2019 where he allegedly beat her, spat at her and mocked her with pig noises.

This incident was what Ricci said sparked her decision to divorce her husband of eight years.

Ricci claims she told Heerdegen she wanted a divorce but it was hindered by the start of the COVID-19 pandemic in March when lockdown quarantines were first initiated.

She said in the filing that she found herself ‘stuck in the house with a man who had physically and emotionally abused me, and knew that I wanted to end the marriage’.

Ricci alleges that Heerdegen ‘focused solely on punishing and terrorizing me 24 hours a day… I was afraid to sleep at night.’

The filing details two instances in June where Heerdegen allegedly physically attacked her. 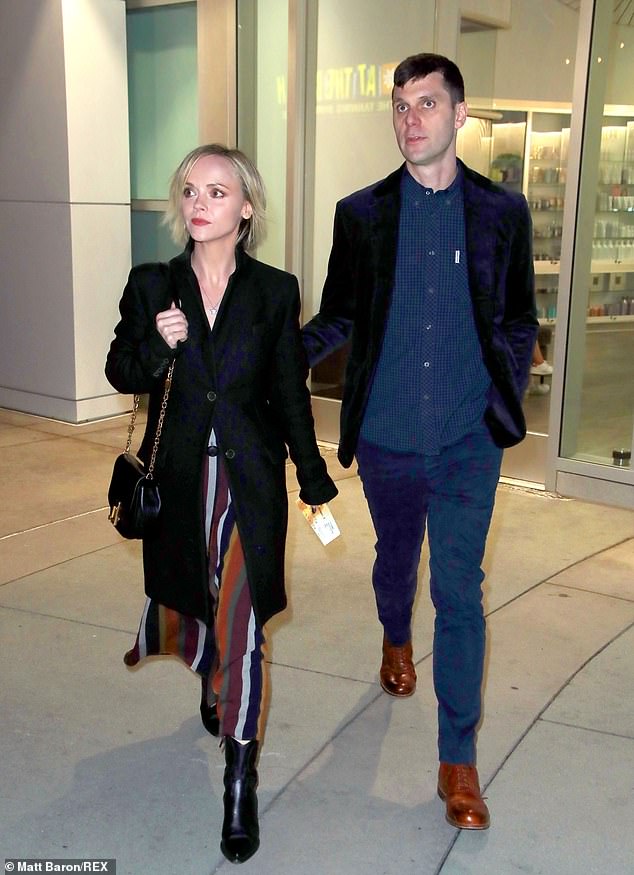 Timeline: The couple married in 2013 after two years of dating. Ricci filed for divorce in June 2020 citing irreconcilable differences as the reason why she wants to end the marriage. They are pictured in February 2019

The first was June 2 when she claimed Heerdegen allegedly chased her through their house to stop her from calling 911.

‘He grabbed my wrists and hands, dragged me, and slammed my body into the fire pit we have in the yard,’ she said in the filing. ‘I suffered cuts, bruising, and soreness of my hip, which still causes me pain today.’

The second occurred on June 25 when Ricci alleged that her estranged husband followed her through the house while ‘screaming at me, spitting on me, throwing coffee at me and throwing a chair at me’ in front of their son.

She called 911 in that instance was given an emergency protective order against him that prohibited any contact between the couple.

The court documents detail Ricci’s fear that Heerdegen will harm their son, claiming that he has allegedly threatened to ‘abduct’ the boy.

In addition to the restraining order she requested, Ricci also asked the court to block Heerdegen’s potential efforts to ‘humiliate and embarrass’ her with audio and video clips he amassed during their relationship.

The couple married in 2013 after two years of dating. They met on the set of ABC’s Pan Am.

Ricci filed for divorce in June 2020 citing irreconcilable differences as the reason why she wants to end the marriage.