By Sean O’grady For Mailonline

He finished in sixth place on this year’s I’m A Celebrity… Get Me Out Of Here!

And AJ Pritchard was clearly happy to be back to normality as he enjoyed a date night with his girlfriend Abbie Quinnen in Covent Garden on Wednesday.

The Strictly Come Dancing star, 26, cut a casual figure for the evening, sporting a black jumper along with a pair of dark grey jeans. 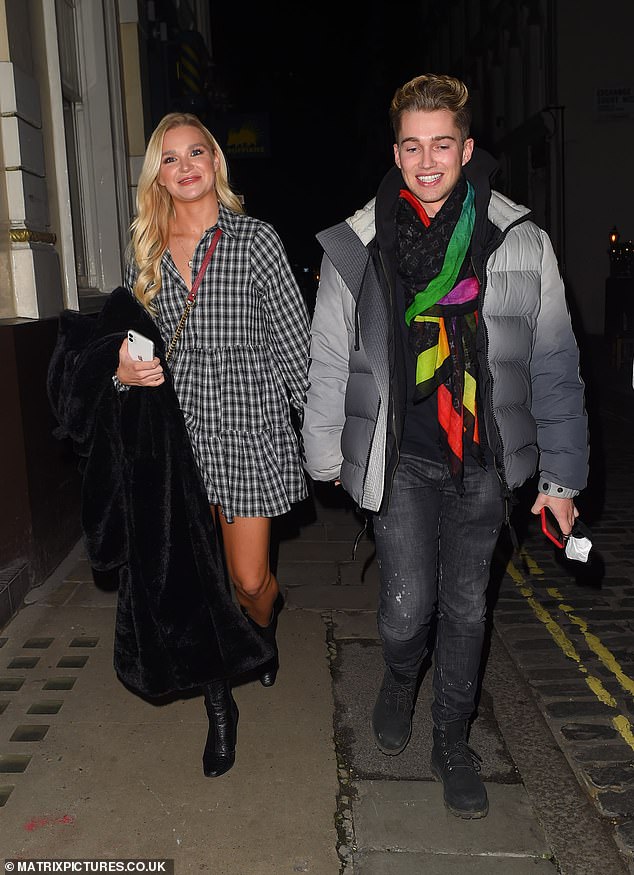 Romance: AJ Pritchard was clearly happy to be back to normality as he enjoyed a date night with his girlfriend Abbie Quinnen in Covent Garden on Wednesday

The TV star also wore a grey bomber jacket while he wrapped up further with a scarf while going for a romantic stroll with his other half.

Abbie, 23, donned a plaid mini shirt dress for her date with AJ while she added height to her frame with black boots.

Letting her blonde locks fall loose down her shoulders, she added to her outfit with a faux fur coat.

The couple were seen donning face masks as they climbed into a taxi after making the most of being reunited. 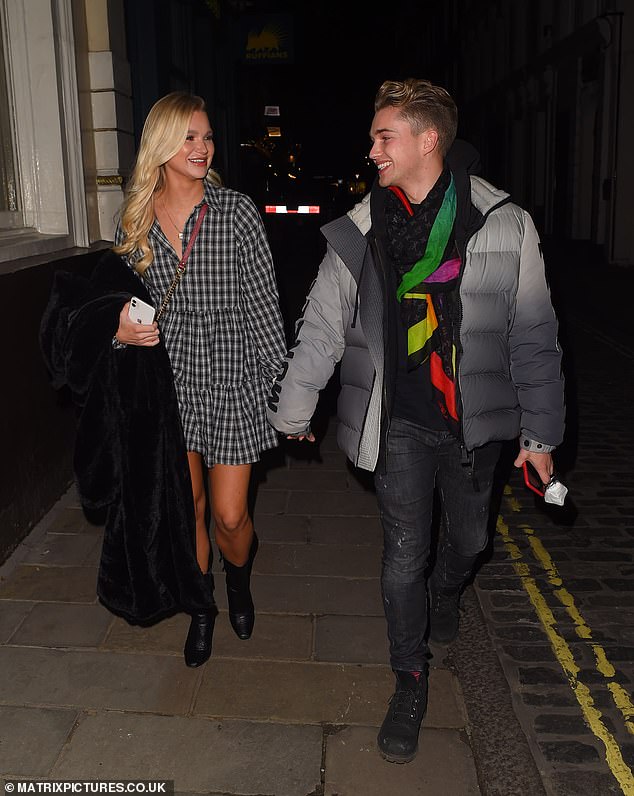 Laid back: The Strictly Come Dancing star, 26, cut a casual figure for the evening, sporting a black jumper along with a pair of dark grey jeans 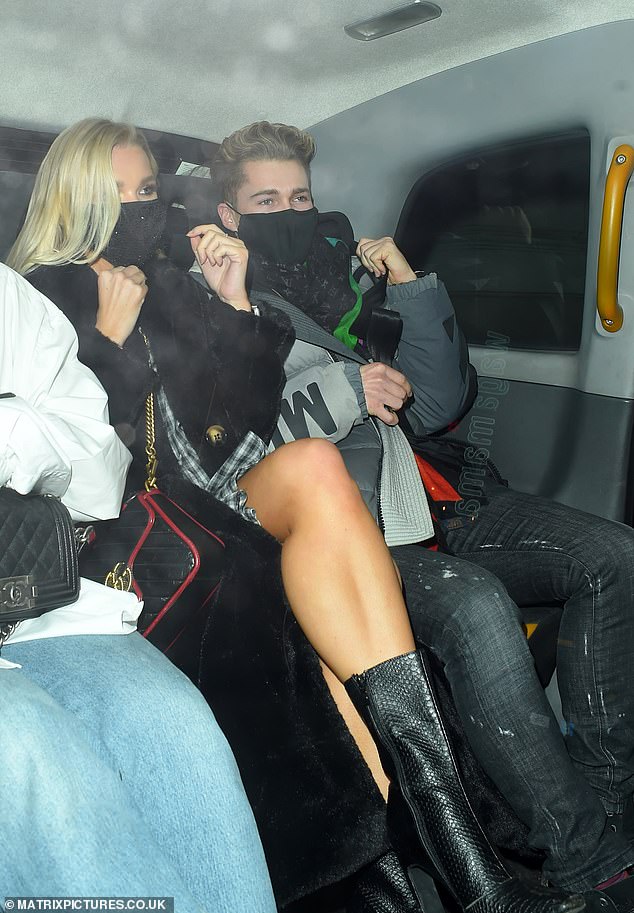 Date: Abbie, 23, donned a plaid mini shirt dress for her date with AJ while she added height to her frame with black boots

Abbie was sure to give AJ a welcome home to remember as she organised an extravagant balloon castle in his flat following his stint on the ITV reality series.

Following his appearance, the TV star’s other half took to her Instagram Stories last Thursday to reveal the lengths she went to ensure AJ’s arrival back to his pad was extra special.

Showcasing hues of silver, red and white, the lavish balloon arch featured balloon spiders, turret and also a red carpet leading up to it like the campmates usually walk on after being voted out of camp.

‘Guys, oh my god AJ is literally around the corner,’ she said before pointing her camera to the balloon art. ‘Look what I’ve done for him. This is a balloon castle and we got spiders. 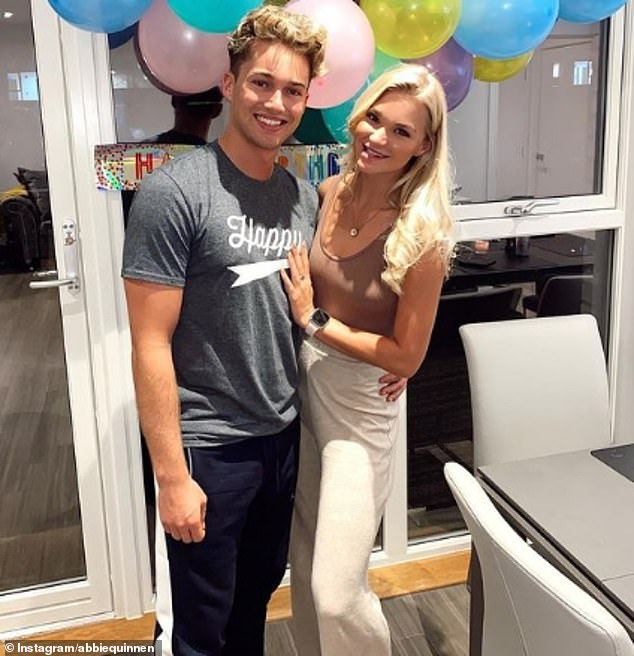 Welcome home! Abbie organised an extravagant welcome home party in AJ’s flat following his stint I’m A Celebrity… Get Me Out Of Here! (Pictured in November before entering the castle)

Abbie then shot to their kitchen table, which showed a plethora of sweet treats including Oreos, Lindt chocolate and Percy Pigs.

These are all his favourite snacks,’ she continued. ‘I’m so excited to see him my heart is racing.’

Her heartwarming welcome home for AJ come days after MailOnline exclusively revealed that the former Strictly star treated Abbie to gifts and booked her a romantic weekend away following his Castle stint.

The dancer spoilt Abbie with roses, perfume and candles that were delivered to her while he competed in gruelling trials for the ITV show.

Professional dancer Abbie, who believes AJ is ‘The One,’ said she had been ‘going crazy’ without her boyfriend by her side during his stint in the Welsh camp. 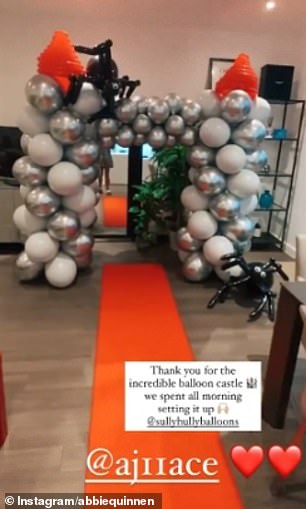 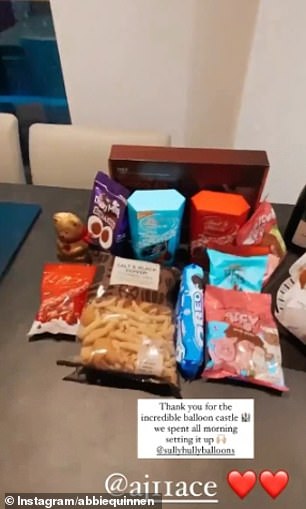 Sweet: Abbie organised a balloon castle and a variety of his favourite sweet treats

In an exclusive interview with MailOnline, Abbie said: ‘I am so desperate to see him – I am going crazy I feel like I have been lost without him.

‘All I want to do is hug him and kiss him – it’s been too long now! I definitely can see he is missing me.

‘While AJ has been in the castle he organised some gifts for me that I’d have during his time in there to show he was still thinking of me.

‘He has booked Soho Farmhouse so we are going there in December for a couple of nights so I’m really excited for that.

‘He was so cute and very, very romantic, I got some gorgeous roses and candles and perfume as well.’ 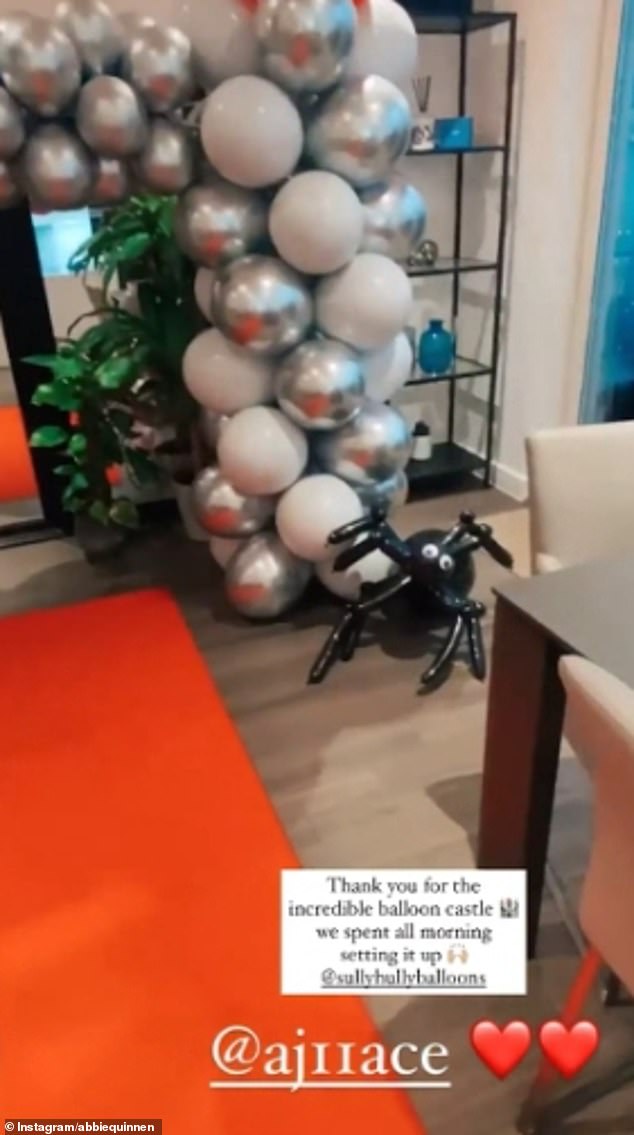 Fit for a king: The balloon castle featured balloon spiders in keeping with the I’m A Celeb theme